I received the following from one of my high school classmates, Brenda Smith Atchley. I was touched by her  memories of life in Western North Carolina and her much loved grandfather. I definitely had an “Oh Wow” moment as I read about her rich heritage.

Vivid memories growing up in Western North Carolina has been such a blessing to me. Until I was seven I was raised in a community called Newdale, which is  six miles from Spruce Pine and 6 miles from Burnsville North Carolina. I had cousins, aunts, uncles, grandparents and a mother who all lived on the same road.  We had no car so we walked everywhere. I lost my father when I was just one year old.  My grandfather and uncles took over that role.

I went everywhere with my grandfather Rositer Tulius Ensley (everyone called him R.T). He was everything to me. He was a detective , traveled with a power company hopping trains and eating off the land, sweet pototoes, watermelon, apples whatever he could find as he traveled. 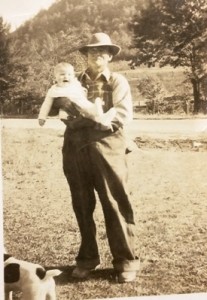 After settling down he married my grandmother at age 21. She was 15. He was a typical farmer. He had shrapnel in his shoulder and had a glass eye from injuries in the war. He raised hogs, cows and horses at one time.  He also had tobacco crops that I can still see hanging in the barn. I remember following him with horse and plow dropping the tobacco plants in a hole and going back to cover them up. I really do not know how he did it all.

They had five daughters. He built 3 large ponds which he planted with minnows to sell for fish bait. He would make us sit quitely on the side to wait and watch. He would throw cornbread into the top of netting that he built with a pole. All of a sudden he would pull it up and catch so many minnows. We let the bull frogs go back in the water. He had a concrete place with water where   he would keep them in a container and men would come from all over to buy fish bait from him. I also remember that at night my grandfather would water his yard.  The whole family would then go out in the front yard with flashlights and catch dozens of night crawlers  which he sold to help raise his children.

I remember that my grandfather would kill his hogs  and they would fix hams to hang up from barn rafters for the winter. With the gardens they planted, they sat around fixing the vegetables which they would can. It was so much fun watching my mother, grandmother and aunts sitting under the tree, which is still there, talking and laughing with the beautiful North Carolina mountains surrounding us.

There was no better childhood. We had no money but did not want for anything, We made our own toys and played all day in the woods making mud pies, catching lizards to sell my grandfather for candy money.

My grandfather also taught himself to be a taxidermist. I saw him tan hides that people brought him and once a bear that he made into a rug. He was not the hunter just trying to make a better life for his family. He would occasionally trap a rabbit. The man worked from morning until night providing for his family and this is a tribute to such a fine man, my grandfather.

I treasure all the memories that my family left me that has provided me with a lifetime of things to reflect on and from which to build.

The views are still pretty and the old home place is still there that my grandfather built. The road took mother’s little house and some of the mountain but it can’t take away my memories. Thank you God for such a rich heritage.”

2 thoughts on “A Rich Heritage – Thank You Rositer Tulius Ensley”